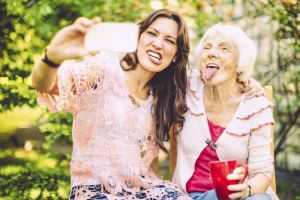 A documentary on SBS Dateline on 3rd May titled “My 93 year old Flatmate” reported on a unique social housing experiment at a retirement home in The Netherlands. In my role as an Aged Care Placement Specialist I visit many aged care facilities and although many of them are very well appointed with great services I have never heard of this idea before. Six Dutch students live rent-free in the Humanitas Deventer retirement home near Amsterdam. The arrangement is that the students spend about 30 hours a month helping at the home, mainly being a good neighbour, in return for fee board. One of the students Jurriën says “When I get home from school, I visit my neighbour for an hour or so. Elderly people are full of life. As a student, you can learn a lot.” Jurriën loves living at the home and is free to come and go as he pleases, but there are drawbacks. “People die.” he says. He finds this difficult, particularly when it’s a friend, but says he can handle it.

As in Australia, the cost of aged care in the Netherlands continues to rise. The cost of student housing has also risen, but even more concerning was that there simply was none available in the area. CEO of Humanitas Deventer, Gea Sijpkes, devised the concept with these considerations in mind.  She wanted the home to be warm and for residents to want to live there, but realised it would cost too much to have extra staff. “If you do that with students, then there is a social return on investment against loneliness. That’s the idea.” She has found that the students quickly form a special bond with residents.

Gea Sijpkes says she can’t see any reason why the concept couldn’t work in Australia too. She finds that the elderly benefit from the students living amongst them, opening up their world, bringing the outside into their home. “The elderly tell stories, they have a lot of interest in the young ones. They always want to know whether they have girlfriends and whether they are staying overnight,” she laughs. The focus has shifted from their illnesses or who has died, “Now they are talking about the music party that Jurriën goes to in Amsterdam!”   I wonder if this concept will be taken up in this country? I look forward to one day visiting homes where the young live amongst the elderly.